Almost a month into the NBA season, most teams have already played 9-10 games each, and the fantasy narrative is beginning to unfold. We’ve seen some good, some bad, and some ugly *cough, cough Kyle Anderson*. After a nice sample size of action, opinions are forming, we think we’re getting a read on the landscape, and things are starting to look a little more concrete.

But there are some situations that have yet to make themselves so transparent, whether it be due to injury or unforeseen coaching decisions, like unexpected rotations and/or playing time (or lack thereof… we’re looking at you Larry Nance Jr). Here are some not-so-fluid situations to keep your eye on in the coming weeks:

This first one is a gimme. As a perennial top 50-ish player, expect some positive regression. Only 25 years old, but already in his sixth season as a pro, Porter is approaching his “prime” years. We know what we have in Porter already – a career 40.3% 3-point shooter who has made significant strides each year to improve that aspect of his game. Last season he finished at 44.1%… from 3! Plenty of players don’t even reach that for their normal FG%! He also finished last season with 14.7 points, 6.4 boards, and 1.5 steals per game with an 82.8 FT%. This season he’s yet to reach his norm, with a lower-than-usual 45.5 FG% and 36.8% from 3, while also missing a few points and rebounds. Coach Brooks is playing him a couple minutes less per game for now. Can we attribute that to a toe injury or the drama that seems to always be coming out of Washington’s locker room? Porter’s name has even popped up in some rumors about other teams gauging his market value (namely the Pelicans). Either way, look for Otto to get back to form soon.

This is kind of a buy-low stash with the added benefit of some production from a thin position now. Collins may not have been the hottest name to come off the board in the 2017 NBA Draft lottery, but he is beginning to display the strengths that got him there. At 7ft tall with a 7’1 wingspan, Collins is a shot-blocking phenom who displayed his abilities in his one year in college at Gonzaga, averaging 4.1 blocks per-40 minutes! He also averaged 47.6% from 3 in that one year at Gonzaga (albeit on 0.5 attempts per game) and is currently at 41.7% as a sophomore in the NBA (this time at 2.2 attempts per game). We’re on unicorn-watch here with those numbers, people. As the clear backup to the oft-injured Jusuf Nurkic now, Collins is showing off, and, at a ripe 20 years of age, should only get better as the season progresses. If you think the Zach Collins owner in your league is fretting about that one decent Meyers Leonard night, send out an offer. Great dynasty hold.

This one is a little risky, I’ll admit it. It’s trying times for a Lonzo Ball owner right now. We expected great things off the jump from him, learning from the greatest player in the game. Then Rondo happened. Ball seems to have improved his 3-point stroke (38.8% this season compared to 30.5% his rookie year), which is something the Lakers lack on this roster. Ideally, Lakers’ coach Luke Walton could snuggle up to the idea of leveraging Lonzo’s size for defensive purposes, as he could more easily switch onto bigger guys when they’re hit with a screen. He may not get all the minutes he deserves this season with Rondo around, and there’s a plausible scenario in which Rondo sticks around for a minimum contract passed this year’s campaign, but I still believe there exists a bright future for this young guy still shaking off the rust after offseason knee surgery. 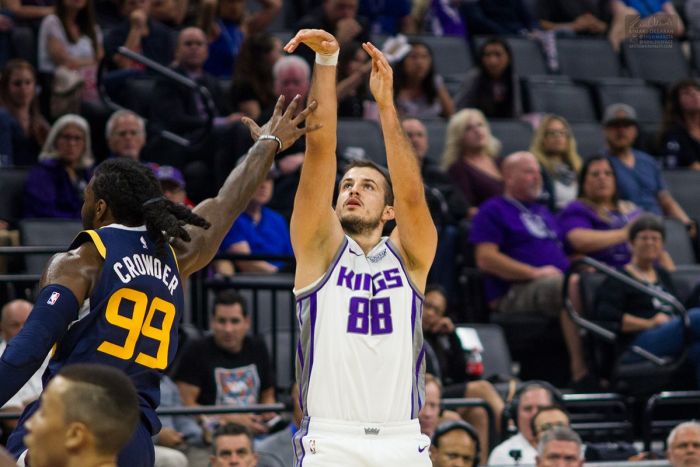 This one is plain and simple. Bjelica should lose his starting job to Kings’ #2 overall pick Marvin Bagley III once they are eliminated from the playoff picture, if not before then. Bjelica is getting almost 27 minutes per game to Bagley’s 23. That can be attributed to Coach Joerger wanting to ‘space the floor more’ next to starting Center Willie Cauley-Stein. That’s a load of garbage because Bagley is a good 3-point shooter. He was in college, and still is in the NBA; he just doesn’t shoot a great volume of them. But that can be fixed. By the way, did you know Bjelica is 30 years old? Obviously not the best Dynasty play. And soon enough won’t be a good fantasy play in general.

The second King to make this list, Hield has exploded onto the scene this season with a career-high in several categories – 20.1 points per game, 2.6 assists, 0.6 blocks, 5.6 rebounds, .515 FG%, and… 31.7 minutes. That last category will be the detriment to his value as sophomore sensation Bogdan Bogdanovic has now returned from injury and will slowly eat up more and more playing time while he gets his feet back under him, stealing minutes from Hield (although it should be from Justin Jackson). Coach Joerger could be interested in playing Hield and Bogdan together more this season, and Hield even has a chance to keep his starting job, but his minutes are bound to take a hit. Maybe a league-mate is convinced that this is Hield’s breakout campaign. They can’t be blamed for thinking that, but if you can swap Hield for someone from their team that has surefire rest-of-season value, pull the trigger. 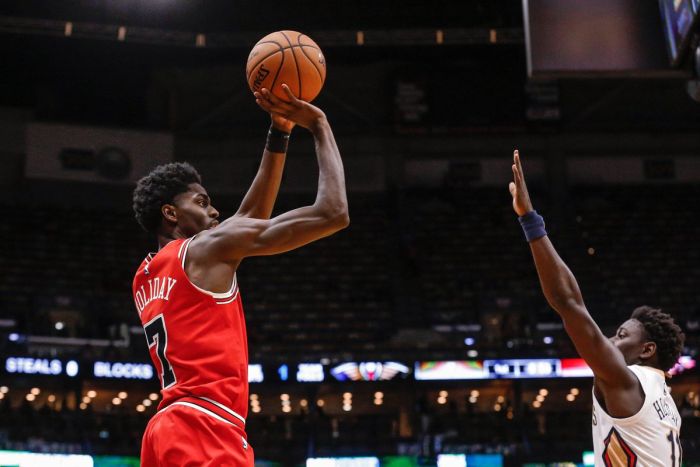 A surprise of the season so far at 29 years old, Justin Holiday is another player making an appearance on this list who is experiencing career highs with 1.6 steals, 2.4 assists, and 35.7 minutes per game while shooting 90% from the charity stripe. And just like Hield, Holiday is due for a drop in minutes when Lauri Markkanen, and even Denzel Valentine (who is admittedly still without a timetable), return from their injuries. Holiday has played at least 34 minutes in 9 out of 12 games this season. Don’t expect that to stick. Then again, you never know what Coach Fred Hoiberg is thinking.

Is it cheating for me to put Bagley here when he’s the whole reason Bjelica is on the other side of this list? Nonetheless, we have another King in the house… the full house (get it?). Okay, that was bad. Maybe I should just straight flush that joke down the toilet (I’ll stop now, I swear). Bad Poker jokes aside, Bagley hasn’t been everything he could have been through the first month of the season. I mostly attribute that to Coach Joerger attempting to win. He’ll come to his senses. Hopefully, that happens sooner than later. In his one year at Duke, Bagley managed per game averages of 21 points, 11.1 boards, and 0.9 blocks while shooting 61.4% from the field and 39.7% from 3. He even earned ACC PoY honors. He may not get you all the blocks that other bigs will give you (although he is averaging 1.1 at the moment) but he’ll be a solid contributor in points, rebounds, and FG%, with some 3’s and good 3pt% if your league counts that. We should see a spike in minutes from the 23 per game he’s playing now sometime in the near future when he steals Bjelica’s starting role next to WCS. 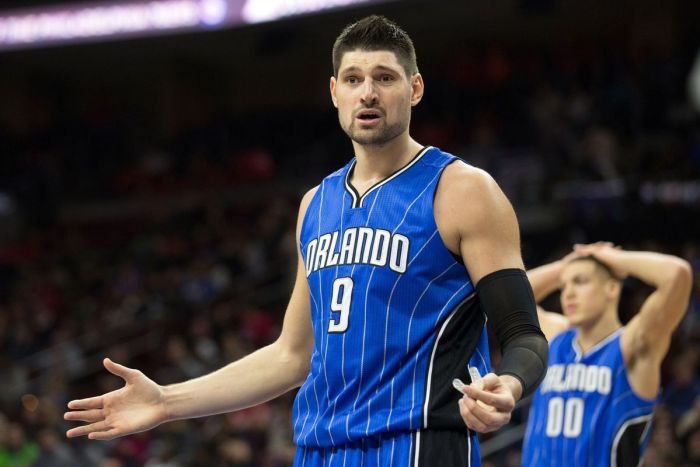 Similar to Bjelica’s situation, Vucevic also has a lottery rookie behind him, breathing down his neck. Even so, the 28-year old is playing out of his mind right now, averaging 17.5 points, 10.4 boards, 3.7 dimes, 1.1 steals, and 1.3 blocks while shooting 53.3% from the field and 45% from 3. While those numbers aren’t too far off from what he did last year, he also didn’t have a ripe, 7′ defensive hobgoblin with a 7’10 wingspan (that’s not a typo) waiting in the wings back then. Mohamed Bamba is playing less than 20 minutes per game right now compared to Vooch’s 29.7. Steve Clifford doesn’t seem to be a fan of playing those two 7-footers simultaneously as they’ve only clocked a total of 34 minutes together through 11 games. The starting center job may be Vucevic’s for now, and even if he does hold on to it, I’d expect some slight regression in minutes as the season wears on in order to get Bamba more developmental time – especially after Orlando gets eliminated from playoff contention. Don’t be surprised to hear Vucevic’s name come up in trade rumors after this hot start.

View all posts by Jay T.